From Canals To Early Steam Railways – A History In Maps

By the time George Bradshaw published his first iconic railway map in May 1839, Britain’s major industrial towns of Birmingham, Liverpool and Manchester were already connected to London. Such was the pace of railway building during the period, with new railway companies emerging across the country, that by the time many maps were published they were already outdated. In deciding to chronicle these early, steam powered railways to display the sheer pace of change we have created seven maps clearly showing each that was opened, along with summary narratives, for the years 1836, 1839, 1842, 1845, 1846, 1847 and 1848. The first section of the atlas presents a detailed look at the lay of the land at the time of the golden age of canals that had begun in the 1770’s. The detailed map published in 1809 shows the established canal network, along with some of the early horse drawn Iron Railways, or “wagonways” as they were known. The building of such wagonways, like that at Ashby-de-la-Zouch connected to the Ashby Canal, was a major engineering achievement and became a model for future railways – with the harnessing of steam, most of the towns in the country wanted a railway connection within 30 years. Following the atlas pages of 1809 we present no less than 25 colour town plans prior to the arrival of the railways and the dramatic changes that ensued. They therefore offer a rare rural insight to the past. The atlas is lavishly illustrated with many thought provoking views and vistas from this bygone age that capture one of the most monumental periods of change in British history. 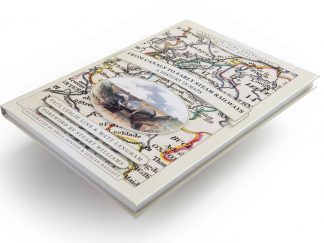 You're viewing: From Canals To Early Steam Railways – A History In Maps £19.99
Add to cart