This hard cover Nostalgic Notebook gives a unique glimpse into the villainous lives of 22 Birmingham men who would become known as Peaky Blinders or of the Peaky Class. Some of them later being rearrested during the racecourse gang wars of the 1920’s. The 22 informative pages that include their original custody photographs taken at the Victorian Lock up, where they were held before facing trial in the early 1900s, are within a Notebook that has Diary information at the front of the book. Include through the 22 informative pages are 7 facts about the Peaky Blinders. 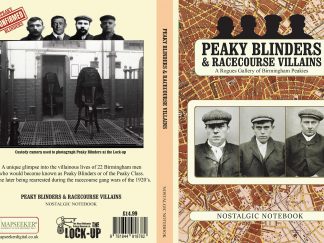