If you are interested in the capital’s murders, mysteries, misery and mayhem please join us in “London…A Sinister City.

Since originally being published in 2009, London…A Sinister City has sold thousands of copies and been re-printed several times. The author Steve Jones wrote 13 books in total, two of which were translated into Japanese and Chinese.

In July 2018 the West Midlands Police Museum approached Steve Jones about re-printing another of his books (Birmingham…the Sinister Side) and selling it at the museum. Steve was very happy that the book would be re-printed but sadly died in August 2018 before it went on sale, leaving behind his wife Christina and their son Tommy. The arrangement has continued with his family, and we are pleased to now bring London…. A Sinister City back into publication, in hardback for the first time. These re-prints are dedicated to the memory of Steve, who told the history of crime and punishment in such a captivating way.

If you are interested in the capital’s murders, mysteries, misery and mayhem please join us in “London…A Sinister City

Re-published by Mapseeker Digital Ltd in association with the West Midlands Police Museum.

Be the first to review “London ……A Sinister City” Cancel reply 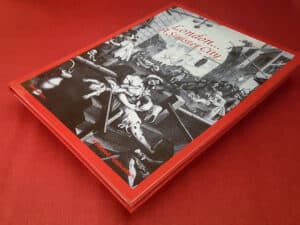