This folded map (890mm x 1000mm) pictorially illustrates the history of Britains Railways up to its previous publication date of 1974. Drawn by Laurence Richardson and last published in 1974 by Collins Bartholomew as a fold up map. Now re-digitized and re-published by Mapseeker in association with the Collins Bartholomew Archive, the map covers all of England, Wales, Scotland and Ireland with various historical events, progress, iconic steam locomotives, and heritage railways illustrated pictorially in the form of eye catching vignettes. The map is surrounded by the crests of many of the Railway Companies that were founded over time until they were consumed under the Amalgamation of 1923. 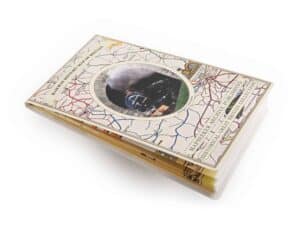