United Nations Map Of The World

This folded map (890mm x 1000mm) pictorially illustrates the historical events around the world. It was drawn by Leslie Bullock , and first published in 1948 to commemorate the irst sitting of the General Assembly of The United Nations which met in London on the 10th of January 1946 and later published by Collins Bartholomew as a fold-up map. This popular map from its time has now been re-digitized and republished in association with the Collins Bartholomew Archive using the latest printing technology. The print media used is 90 gsm “Progeo” paper which was specially developed as a map paper. It has high opacity to help reduce show through and a cross grain giving it greater durability to as the map is being folded. 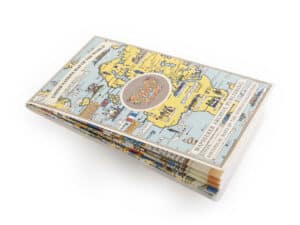 You're viewing: United Nations Map Of The World £19.99
Add to cart