Travel back to 1928 Liverpool by exploring the detailed street atlas republished in larger detail and supplemented with nostalgic views and vistas from the late 1920’s and earlier. Liverpool’s expansion from a small fishing village to a major city port was brought about mainly from its trade from the West Indies, Ireland and mainland Europe. Over the next few decades many council estates as well as many public buildings would be built. Following the outbreak of World War 2 large portions of the cities heritage would disappear, either as a result of heavy bombing or gung-ho post war modern planning. Numerous farmsteads can be seen in the outlying countryside, bordering hamlets and small villages are still rural in character; however they would all soon be consumed by the great city of Liverpool as it continued to expand. There is a comprehensive index to all streets and places of interest featured in the street atlas. 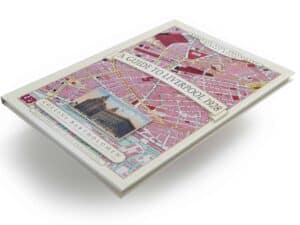