Travel back to 1927 Manchester by exploring the detailed street atlas republished in larger detail and supplemented with nostalgic views and vistas from the 1920’s and earlier. During the Industrial Revolution the powerhouse of Manchester had become the hub of a wide network of small Lancashire townships – “Little Manchester’s” as they were commonly known – towns that served the now massive cotton industry. Although its reputation as the prime source of World textiles declined later in the century as a result of cheaper foreign imports, Manchester would continue to expand out into the surrounding neighbourhoods. Heavy wartime bombing that destroyed many buildings and famous landmarks led to major house building programs and the establishment of many Manchester housing estates that exist today. There is a comprehensive index to all streets and places of interest featured in the street atlas. 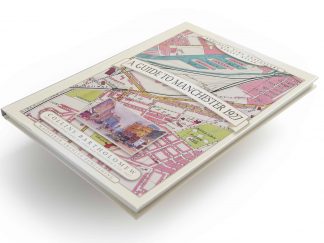