This book is a nostalgic visitor’s guide to Edwardian London when Britain welcomed with open arms Olympians from around the World, staging London’s first Olympic Games in 1908. This commemorative book features memorabilia from the games including a plan of the route of London’s first marathon that would set in time the official distance of 26 miles, 385 yards, and the entire collection of letters, event programmes, and entry tickets to the games compiled by William Barnard, official timekeeper for the games. It is enriched with rare photos’ from the games, however most poignant are the letters written by Lord Desborough appealing for donations from the public for the games to go-ahead, and then thanking them in supporting one of the most iconic Olympics ever staged. The book is divided into 4 sections, 1 is London 1908 – The Rise of Olympism, 2 is The 1908 London Olympic Marathon, 3 is the Guide and Gazetteer of London 1908 and 4 is the Atlas and Street Guide of London 1908. 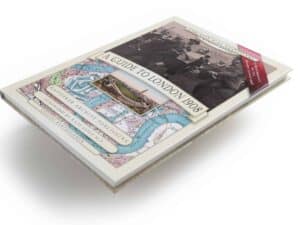